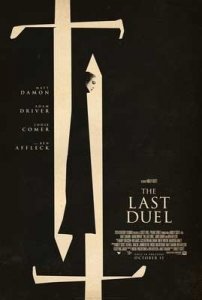 "The Last Duel" is based on Eric Jager's book The Last Duel: A True Story of Crime, Scandal, and Trial by Combat in Medieval France, which brings the turbulent Middle Ages to life in striking detail. When etiquette, social aspirations and justice were driven by the codes of chivalry, the consequences for defying the institutions of the time - the Church, the nobility at court, a teenage king - could be severe. For a woman navigating these violent times, one who had no legal standing without the support of her husband, the stakes were even higher.