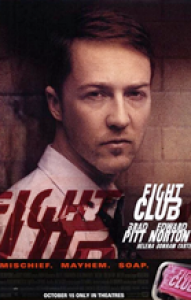 In this adaptation of Chuck Palahniuk's 1998 novel, Brad Pitt stars as Tyler Durden, a sociopath filled with anarchic rage, who organizes an underground organization of "fight clubs." These clubs, in which young men with white collar jobs engage in no-holds-barred bouts, spread across the city. But Tyler has far more insidious plans - he enlists the aid of his unassertive friend, Jack (Edward Norton), to destroy conventional "society" through a deadly series of bombings. When Jack realizes the nightmarish and shocking truth, he fights to bring Tyler down.