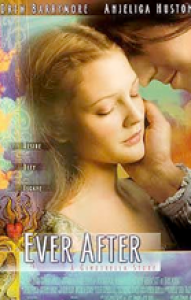 Drew Barrymore takes on the title role in this enchanting film in which a spirited young woman, forced into servitude by her evil stepmother (played by Academy Award(r)-winner Anjelica Huston), finds refuge in an unexpected, yet burgeoning, relationship with the Prince of France. One "small" problem remains as she struggles to mask her true identity in a world in which royality doesn't mix with "the help" and the penalty for duplicity is death.