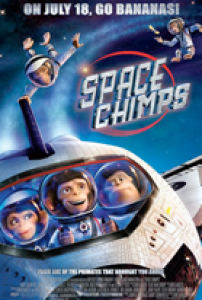 Space Chimps is an intergalactic comedy that highlights the antics of astronaut chimps with the "wrong stuff." Ham III (Samberg), the slacker grandson of the first chimp blasted into space before manned spaceflight, joins two other astronaut chimps for a dangerous mission through a black hole to an inhabited planet. When they're stranded there, the chimps must help the inhabitants rid themselves of a tyrannical leader, and then figure out how to get back to Earth.